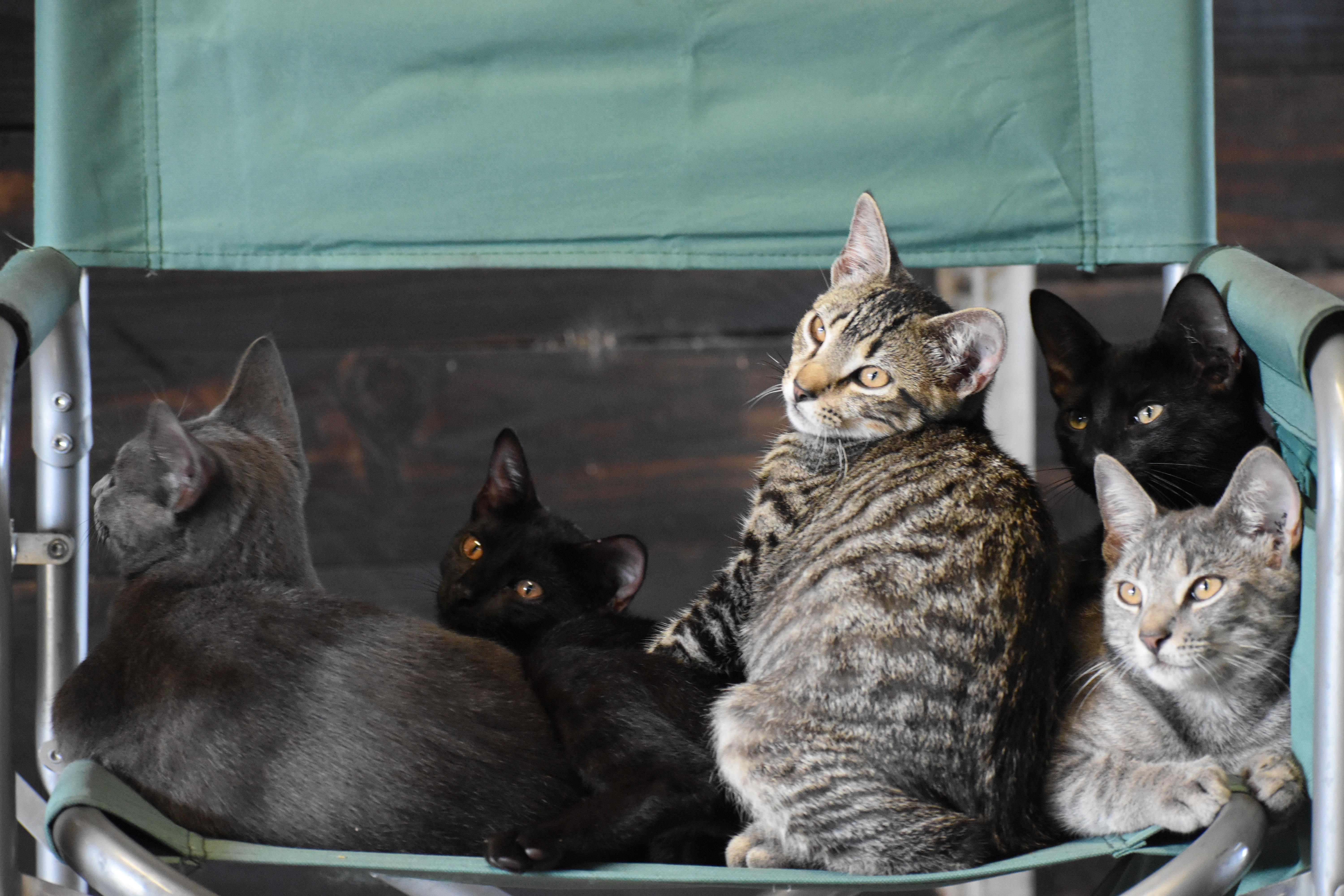 I love this first picture. The kittens posed themselves. It’s nostalgic and reminds me of a JC Penny style family portrait. It’s like the ones I forced my girls to endure in itchy, but adorable sister clothes. In this case, the kittens were all for a photo shoot. I set my chair up in the barn ally as usual. I sit and read a book or articles while Niki grooms her horse, Glorie. It’s peaceful. There’s a gentle breeze and picturesque views of grazing horses in the fields. The scents range from fresh cut alfalfa to oddly stinky, yet somehow sweet horse manure. The barn is a total senses experience horse lovers can’t get enough of.

The kittens are 6 months old this week!

In previous weeks, the kittens were usually piled in a corner or outside wrestling each other. On this day, they slinked out of the feed room and took over my chair. They didn’t seem to mind they left me standing or sitting on a bag of shavings. Natural light streamed in and lit their sleepy faces beautifully which made my makeshift seat though lumpy, tolerable. I took hundreds of pictures while they wove and rewove themselves together into an intricate furry nest of heads and tails. It was a rare treat to have all five enamored by a single prop long enough for an afternoon nap.

In the beginning I didn’t pay much attention to the kitten’s names as they moved as a unit. But now, individual kittens wanted attention. They’d come over and circle my feet asking to be pet. They also liked being scratched under their chins. Holding them was still a short, on their terms only, treat.

Miley’s a great model. She did her own stunts.

Miley, the gray stripped female is the most outgoing and first to venture out in search of new thrills. She was often the star of my photo shoots even suggesting her own compositions. She’s a great model and did her own stunts. She’s a sweet cuddle kitty when she’s in the mood.

Taking pictures of the kittens has been a wonderful distraction. Journaling their growth helped me live for today and reminded me to appreciate precious moments. It’s been a few weeks since I wrote about them. I’ve missed the time I spent photographing their adorable antics, but they did their job. They broke down the walls on my writers block. I was inspired enough to write a personal essay which is taking most of my creative writing time right now.

Since I took a break from writing about the kittens, I notice they have fewer milestones to record. Lately, they’re more interested in human attention than seeking out adventure. It’s actually hard to take a picture of Miley or Kool-Aid because the second I squat down to frame a picture they slink over to be pet. Even if I could resist the urge to rub their cotton soft sides, they won’t allow it. They make figure 8’s around my ankles and jump in my lap if I’m not attentive enough.

The kittens are 6 months old this week! They’ve grown so much it doesn’t make sense to break down their progress by weeks anymore. Instead, I’m going to share my favorite pictures, the ones that show their feisty personalities and fun compositions.

Miley thought this huge old oak tree was a fabulous jungle gym. She was 14 weeks old when this picture was taken. She climbed with ease even though she and her entire family, mama included were fixed the day before. I was amazed by her agility and her comfort level at such heights. It was clear that her graceful moves would make her a keen hunter.

Niki titled this picture, “When your sister steals your makeup.”

At 15 weeks old the kittens were pro wrestlers. Niki titled this picture, “When your sister steals your makeup.” Kay-Brianna was temporarily winning the fight, but don’t worry, Miley threw her share of paw punches.

After their rough and tumble match Miley and Kay-Brianna cozied up together in the barn alley for an afternoon nap.

Miley was always such a creative poser. Here she’s posing for her Cat Quarterly center fold. It’s all fun and games until your picture is photo bombed by a stray chicken.

Kittens are the perfect balance of innocence and badass.

The kittens took the wrestling into the barn. Their expressions were hilarious. Thank goodness my camera has sport-mode, or I never would have captured these great action shots.

This pic was so cute I just had to include it. As you can see, the kittens are not shy. They know how to make themselves comfortable.

The kittens started to venture outside the barn and past the immediate area to the horse arena where Niki has her riding lessons. Grape showed an interest in our activities. Luckily, he stayed safely protected from pounding hooves tucked inside the bottom of the mounting block.

The barn is peaceful with picturesque views of grazing horses.

Miley liked chill-axing in the barn while Niki tacked up her horse. It’s been fun watching the kittens grow from cuddly infants into playful adolescents.

On this day, I had intended to read a book, but the kittens had other plans for my chair. The kitten cuddle fest that ensued was worth the minor inconvenience.

Taking kitten pictures turned into a physical calendar of sorts. It was a way to track the passing weeks with hope.

Now that the kittens are half a year old, they’ve settled into a routine of sleeping, eating, and wrestling with each other. Like the kittens we’ve also settled into a routine. We take life day-by-day hoping and praying something will change to bring an end to this pandemic. All the while, there’s a dull sense of sameness. It’s like treading water with no shoreline in sight. We’re living life, but on a muted tone. I’m coping by immersing myself in work, cooking, and spending time with my family.

I’m optimistic about the future.

I think about the future and look forward to the time when we can once again move around freely. It will come. I’m optimistic that we’ll make it through this dark tunnel in time and emerge into the light stronger than ever before. Just like the kittens, I’ll get by with a little help from my family and friends.

Taking pictures of the kittens was a wonderful distraction.

I hope you enjoyed taking this Kitten Quarantine Countdown adventure with me. I’m still going to take pictures of these adorable kittens, maybe not so many though, maybe…

Joy is possible if you grant yourself time to find it and feel it.

Thanks for joining me. I appreciate you, your encouragement, and your support.

Thank you to Kiper Farms for all the amazing photo opportunities and for the friendly environment you inspire.

Dancer as seen in Sculptural Fused Glass with Lisa Vogt

Buzzing Bees as seen in Simple Pleasures with Lisa Vogt

Succulents as seen in Simple Pleasures with Lisa Vogt

Currents as seen In Sculptural Fused Glass with Lisa Vogt

Glacier as seen in Creative Slumping Webinar with Lisa Vogt

Poppies as seen in Fused Art Design with Lisa Vogt

Wondrous as seen In Sculptural Fused Glass with Lisa Vogt

Lemon Plate as seen in Artfull Home with Lisa Vogt

Red Heart as seen in Lumin-Essence with Lisa Vogt